The oldest bottle of olive oil in the world

The oldest bottle of olive oil in the world was discovered in the ancient Roman town of Herculaneum, near Naples. This discovery is extremely important, as it sheds light on the molecular evolution of olive oil over time!

The bottle has been displayed in a museum since 1820, when almost three centuries later piqued the curiosity of Alberto Angela, an Italian paleontologist and journalist. Unable to define the nature of the liquid contained in the bottle, a study was conducted under the guidance of Raffaele Sacchi, professor in the Department of Agriculture at the University of Naples Federico II, in collaboration with the National Research Council (CNR).

After a series of studies, the researchers were able to confirm that the content of the bottle was indeed olive oil.

Our study strikingly highlights the molecular evolution of olive oil through an almost 2,000-year-long storage period.

Thus, due to the high temperatures caused by the eruption of Vesuvius, as well as its nearly two-millennia storage period in uncontrolled conditions, the oil residues still bear the traces of the chemical modifications typical of altered dietary fats.

The saturated fatty acids and phytosterols profiles made it possible to establish that the residue in the bottle did not contain animal fat, and that it was indeed olive oil.

We have been able to clearly confirm that what we have in our hands is the most ancient olive oil residue that has been recovered, and today is exposed, in significant quantity, dating back to 79 AD.

The nature of the bottle’s content is an indisputable proof of the importance of olive oil in the nutrition of the populations in the Mediterranean region and especially of the ancient Romans of Campania.

This preserved bottle of olive oil, being almost 2,000-year-old, is currently in Italy, at the National Archaeological Museum of Naples where tourists can admire it and learn more about it. 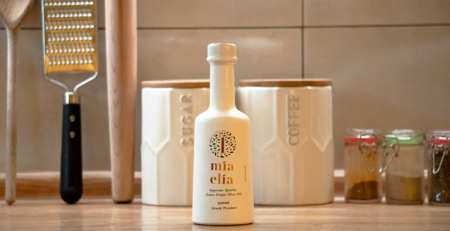 The point where nutrition meets aesthetics is in the act of cooking. 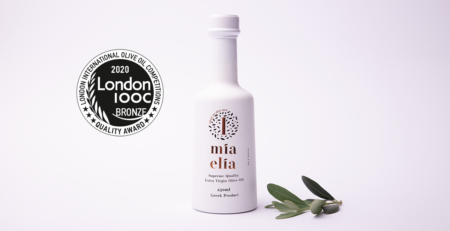 We are thrilled to announce that Mia Elia got the Bronze Award in Quality category, at one of the...

Extra Virgin Olive Oil – The ‘’Liquid Gold’’ according to Homer

Extra Virgin Olive Oil is one of the fundamental elements of the Mediterranean diet.